The Women's March in 2016 (This disappeared so I am posting it again) It is too important! 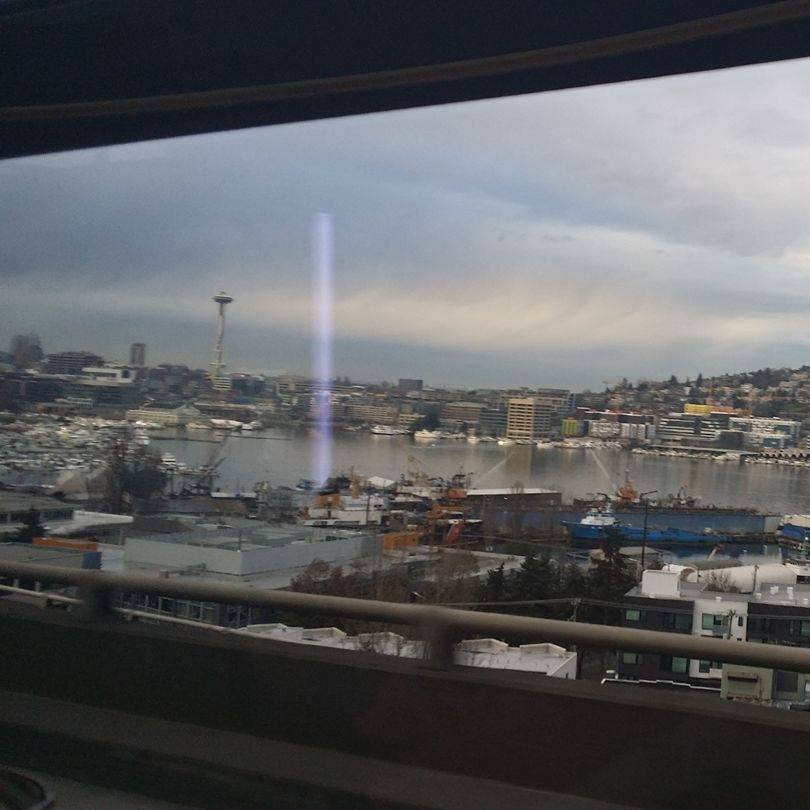 (The bus light looked like a pink lightsaber by the needle on women’s march day! )

I have been a VERY vocal person when it comes to women’s rights.

I will always be vocal about it.

That's why I was so proud of my daughter when she told me that she was marching in Washington D.C.

Then I started thinking, what am I doing???

I love my Friday nights, Saturdays and Sundays relaxing at home with my huz...

But after everything that's happening, I can’t just sit back and do nothing. 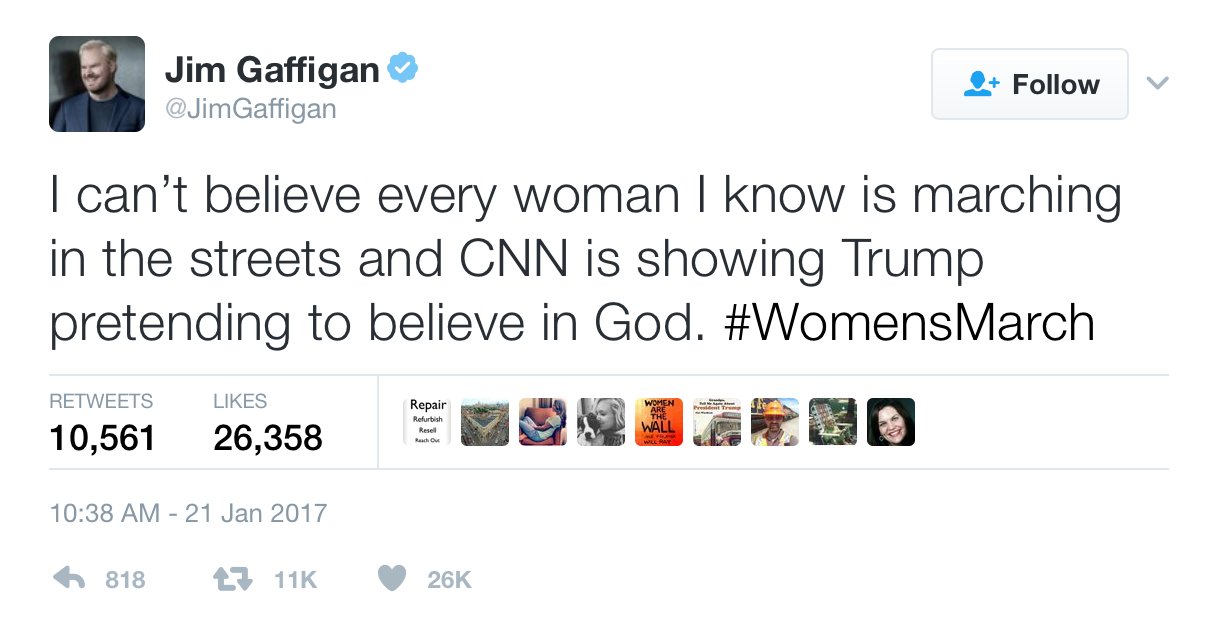 I decided to go to the Seattle Washington march when a friend asked if I was  going.

I met my friend to catch a bus and we went to Seattle from an area an hour or so away.

The minute we got to the park I realized one thing. This was no small march.

This was history in the making.

I saw moms with daughters.

And I saw pussy hats, EVERYWHERE.

They even stuck a giant pussy hat on the troll under the Fremont bridge here in Seattle.

Suddenly, I had an obsession with signs.
I have never seen SO many people with  SO many signs

I HAD to take pictures of them. 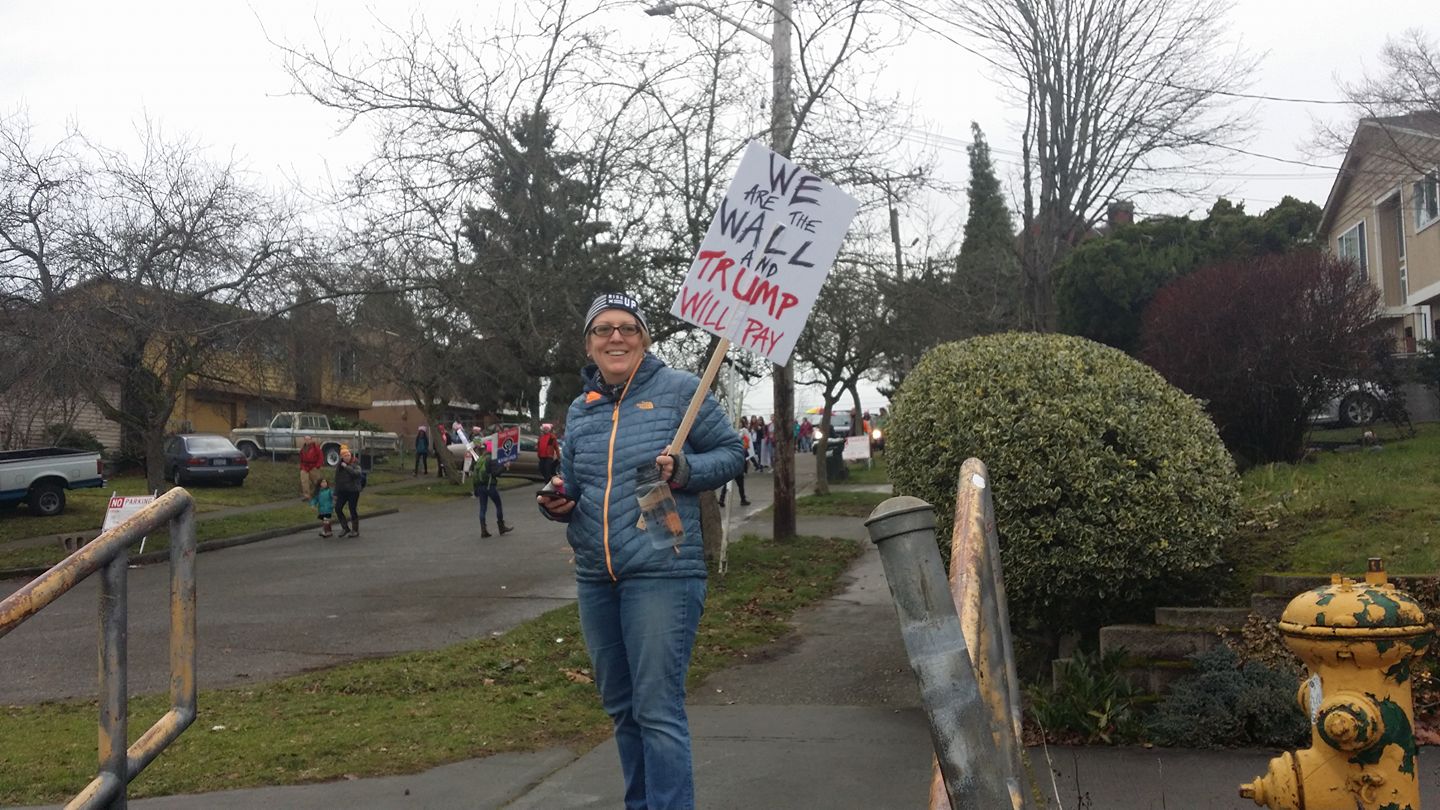 After going with my friend to look for another friend at the other side of the park,
(and asking the cops for directions- who says cops aren’t helpful???  Before we knew it we were on
our way)

But  I couldn’t put my phone down. There were just too many good thoughts on so many signs.

Just when I thought the good signs were ending and I’d get ready to put away my phone...
I saw  so many more incredible signs, so my phone ended up this awkwardly dangling

thing that was documenting history in front of my eyes.

I HAD to keep taking pictures.

There was a great drawing of a lady, legs spread open wide with a cat drawn over her “pussy” 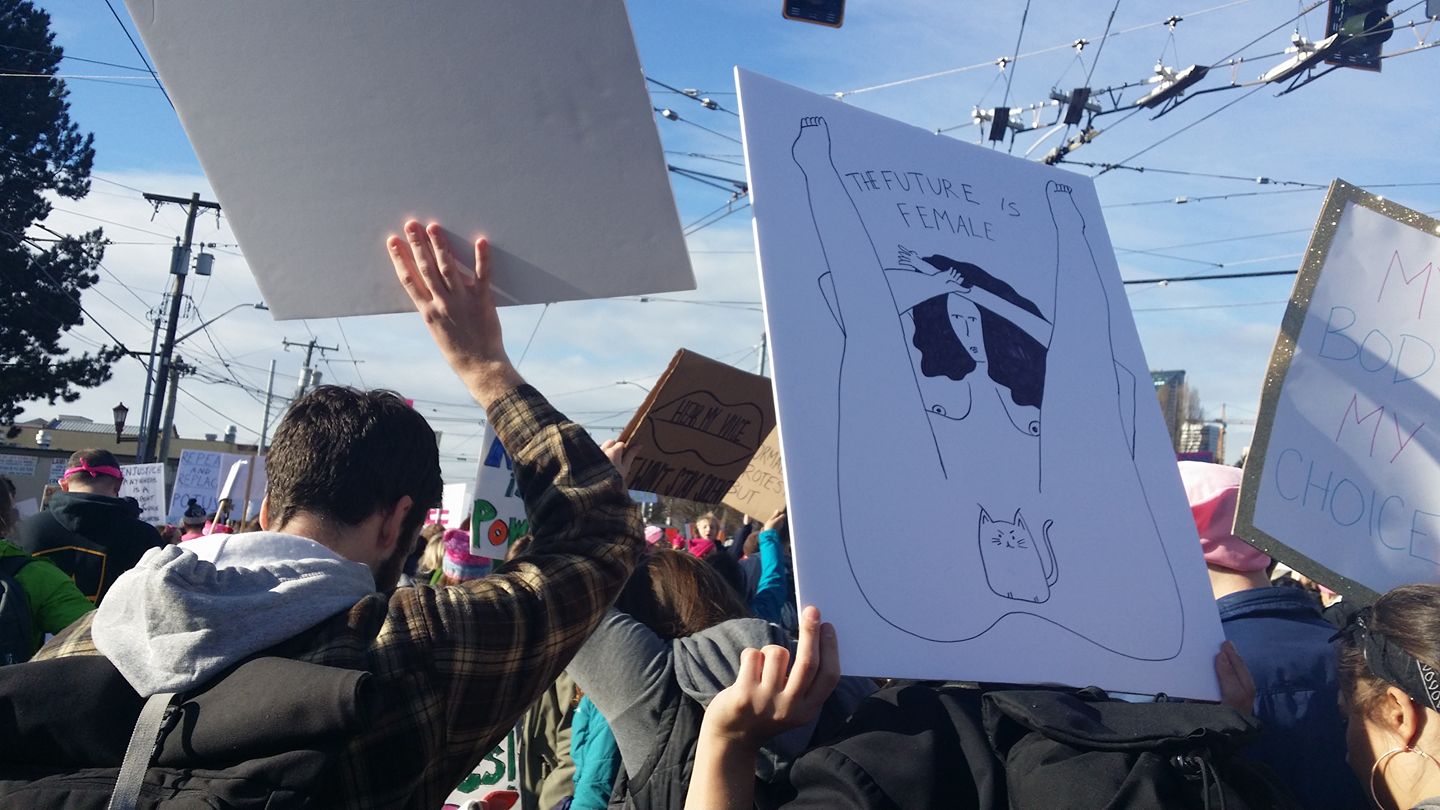 And that is when I lost my friend, somewhere in the crowd.

I haven’t taken the bus in years, so I started to panic.

I yelled “Karen!” to no avail.

Every once in awhile I cracked jokes about being lost... to total strangers... 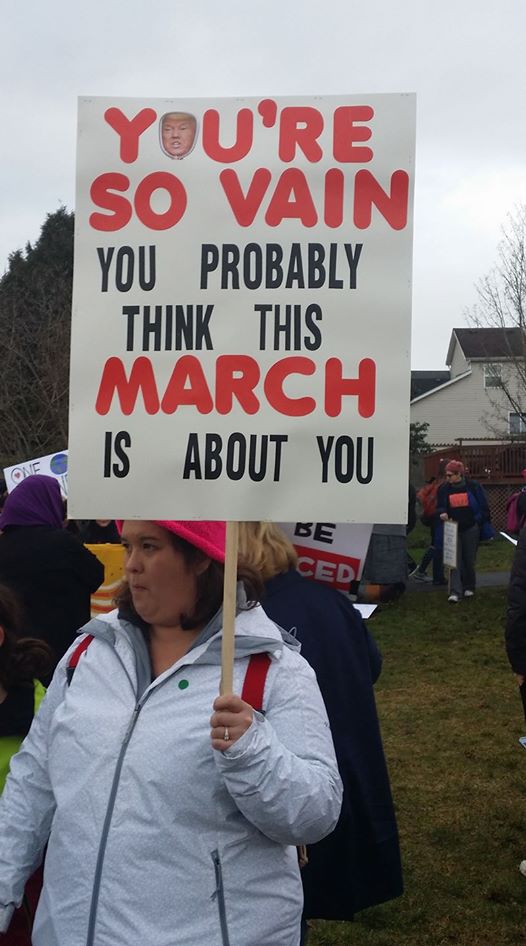 One guy with a thick indian accent asked me what my name was and he yelled:

“Heidi’s friend! Heidi’s Friend! She is lost! Come and find her!” 5 or 6 times which made
the crowd laugh and made me feel a little bit better...even though I was still totally lost.

I never found my friend.

I just hung out with the crowd and decided that I was going to enjoy this, even if I was lost.

Suddenly I heard “Heidi!” Heidi, is that you??” and I turned around to see a friend I hadn’t seen for 5
or 6 years. She was there with some church friends, a church I’d gone to once where for Easter they
had everyone wash each others feet in remembrance of Jesus.

The welcome there was more genuine than any church I’ve ever been.

They even had a woman pastor and a trans deacon. The whole thing made me smile.

And here they were.

This woman I know has saved my butt more than once. Once when I had to bring my daughter
halfway across the country to college and didn’t know how I would do it, she said “take my suv’
and we got her to school.

I still can’t believe that she did that!

I was so grateful to see her.

I had been scared, and now within a few minutes I wasn’t scared anymore.

God has a way of setting just the right person in your path when you need them.

This woman has a way of putting everyone at ease.

She told me her first march was  at 5 years old...she’s in her 60s or so, and her friends
were the same age and older.

I felt privileged to be with such women. They had marched in protests before I was even born.

We marched for at least 5 hours. During the march my friend threw her shoulder out. I told her I would
be “Mark” (her husband) for the day and carry her purse. That I was there to help her when she was
hurting made me feel even better that I was there.

I must say it was the most empowering thing women have ever done in my lifetime.

To look around at that sea of people made me feel that maybe we’ll be ok after all.

Any time that self important oompa loompa tries to take away our rights as women, I need to
remember this march.

I am so proud to say that I was a part of it.

Everyone was respectful, everyone with 1 purpose, though I know people had their own reasons for
marching.

The feeling of unity overpowered EVERYTHING.

And though, by the end of the march, my feet and legs ached, (it was EXHAUSTING!) but I was glad
to be here with my sisters (and brothers) all 175,000 of them!

That’s what happens when people get off their butts and do something.

It was the only thing that has been empowering about this whole election.

That there were women's marches all over the world and that ALL of them were peaceful says a lot
(and maybe that also says we need more good women in power!)

After the march, we waited 2 hours for a bus that never came.

Wait... 1 came, but it was completely full and couldn’t take anyone. We were so tired.
(we’d been waiting for at least 2 hours for a bus) I put my hands up against the bus and pleaded

“HELP US!!!” haha. (The people riding the bus got a kick out of my shenanigans) :P

Bus after bus came by that was going anywhere but where we were...and one of the church ladies

I was with yelled out “FUCK YOU!” when it wasn’t our bus… the enormous crowd that had gathered
was exhausted, but everyone laughed.…

Some Jesus freak was yelling about how we were all going to hell. It made for an interesting
soundtrack for the last few hours we were in the city, but I didn’t care.

We finally gave up on the bus and went to a place to eat.

My friend called her husband to drive to the city and pick us all up.

We were warm, (it had been getting cold, and the air coming off the water from puget sound combined
with rain that was starting to fall was freezing us to the bone so I was so glad to get inside...FINALLY!)

We were warm in more than one way. And I was happy when her husband picked us up.

After all this, my friend, who was tired, threw her shoulder out and had to make cupcakes for her church
the next day STILL  had her husband drove me over an hour to my park and ride to get to my car.

She saved my butt.

You can’t stop THIS tidal wave! NOBODY CAN! 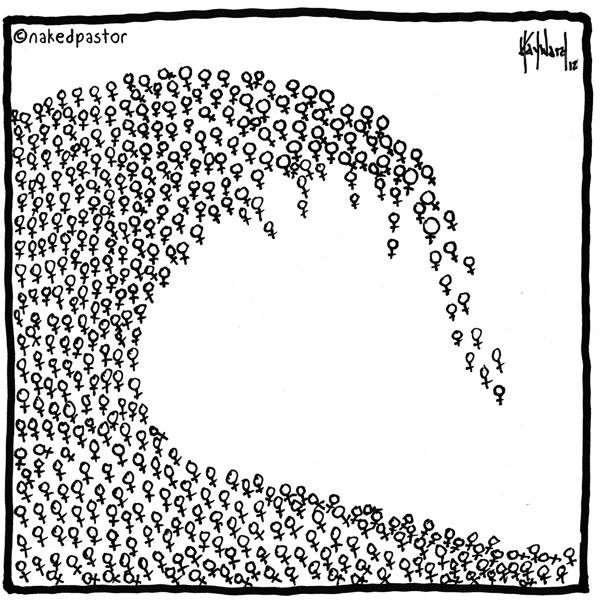 Monday, I was at the YMCA swimming and started to talk to a lady there that I know about the march.

She told me she didn’t want to hear about it. That it was “ridiculous.”

Then she proceeded to tell me that there was a shooting at the march, when I saw on the news that it
was said all over the world that the women's marches everywhere were peaceful.

I looked and found out that yes there was a shooting but that  FRIDAY a man was shot at U.W
(University Of Washington) people protesting...some in black, anarchists with bandannas covering
their faces.

A few women at the Y said “WHY did you march?? It’s pointless! Trump is already in!

They are missing the point.

Women’s rights are in danger here.

Trump and the Republican congress are threatening MY rights. Our rights as women.

My right to contraception.
MY rights and MY body.
Misogyny in ANY form.

Planned parenthood gives out free contraception to women.
My daughter gets the pill through them.

Men don’t have the kind of trouble that we do with this. They get their junk and are not TAXED
for it on top of it!

They want to stop abortion? THAT’S HOW.

Sometimes I just want to shake these women and say “WAKE UP!!!!!”

THAT is why we marched. This is My right ..to do with my body as I see fit, not what THEY see fit. 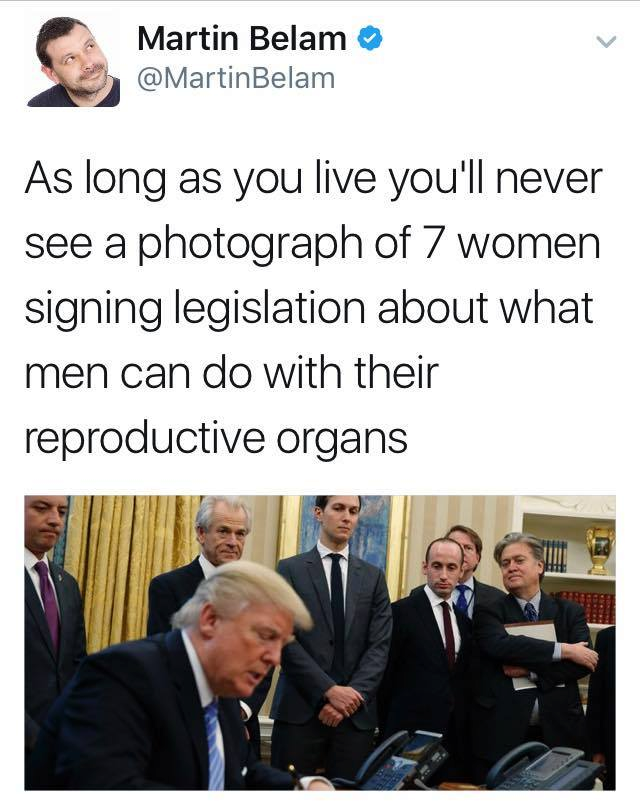 When you see <THIS

You know there’s a serious problem.

They hide BEHIND MASKS.

We don’t. We never will.

(Here’s an inspiring video of the march in Seattle, along with the news of the day… enjoy!)