Donald "Oompa Loompa" Trump And Sexism In My Life

Ok, I bet you knew I’d have something to say, or at least comment on the “Donald”.

As a woman, you know...with a “puss”, it offends me that he would talk like that about women.

I mean, I’m happily pleased that I would be compared in any way to a cat, though I think cats are like teenagers who like to act like they don’t care about anything, until food is involved.

But I think anyone who is so arrogant enough that he would brag that he can grab a woman, wherever he pleases because he’s rich needs a fucking shock collar.

I think all women all over the world would thank whoever put that thing on him. :P

Male dominance is nothing new to me.

I’ve dealt with it since I was pretty much a toddler, and the older I got, the worse it was.

I mean, every little girl (not every girl, but enough of us)  learns from her father how women “should” be treated, according to the way he treats his wife, or sig other.

And my father was a real bastard. I mean, I was strangled for eating after 10 pm. How twisted is that? Talk about the ultimate control freak.

It’s a good thing I had counselling. My life would be so much different if I hadn’t.

I honestly think I would hate men if I hadn’t.

I’ve been married 25 years to the same guy and we’re close.

I’m glad I broke that cycle of violence.

I think that speaks for itself. :)

When I was a teenager, I loved going to one friends house.

She was REALLY into Prince, had  his albums (Ok, I’m dating myself now) and their house, unlike my “you can’t eat after 10, OBEY and go sit quietly in your room as punishment for well, being alive” parents  house...it was a welcome refuge.

Their mother was fun, my friend was fun, and every time I went there, I never wanted to leave.

Until her creepy brother laid his eyes on me. He seemed like an arrogant bastard, and I made a mental note to stay the hell away from him if I could.

I slept over, and my friend and I goofed off well into the night.

I got up late and my friend showed me the shower when I asked.

Well her brother, after I hadn’t been in there maybe 5 minutes suddenly (and quietly) opened the door and came in. I didn’t even know he was there. I started to get out of the shower and SCREAMED! HE WAS IN THERE! (Like a certain pres hopeful backstage “inspecting?”) I grabbed at whatever I could, wrapped it around myself and screamed bloody murder for him to “GET OUT!” and he finally did.

He had already seen me naked.

It makes you feel so vulnerable when someone has seen you like that, without your permission.

I had a neighbor who had a break in years back. She was terrified they would come back.

That is what his doing that did to me. And there was no lock on that door.

I got in the truck and slid as far as I could from him, right near the door in case I needed to jump out.

I lived in Idaho with my parents back then, and there was a street he had to go down that either led to the spud farms, or to my house.

He turned the wrong way.

He turned towards the spud (potato) farms.

It was dark, and I was getting scared.

He stopped the truck by the side of the road.

He said “If you don’t make out with me, I won’t bring you home.”

I knew there was a bet that guys at my high school had made about how many girls, or which girls they could get to have sex with them.

Was that what this was?

Is he going to attack me???

The moment I thought that, I jumped out of that truck and started booking it. RUNNING for all I was worth back towards that little Mormon town...the one that was so backwards. (I’ll go into that later...maybe)

That asshole came at me in the pickup truck, and I wondered if he was going to hit me...he kept driving beside me...honking his horn and telling me to get back in.

I said,”You better be. NEVER do anything like this again or I’ll tell your whole family. I swear I will.”

It was a good five or 6 miles home, damn it. I really just wanted to go home. I was exhausted.

I got in hugging the door, ready to jump out any second if he tried anything. He didn’t.

And I think right now of all the women who have been abused, and especially those who never make it home.

Later I told my friend about what her brother did. She didn’t believe me. Which made me feel even more vulnerable.

I am one of the lucky ones. I don’t know what he was capable of, or what he got away with with other girls.

What gives men the right to treat us as objects??? As “things,” which leads men to treat us as  “property” that they can do anything with? Which brings me to this.

What I would  have given to have pepper spray back then. (Now I know Krav Maga, an israeli fighting technique taught to U.S marines. I think every woman should know these techniques. It empowers you! (happily there are free videos that anyone can learn from Krav Maga girl...I adore that women. Video here for you! :) And its free on YouTube. My huz and I got a plastic gun and knife and practice the techniques all the time. I suggest you do the same. https://www.youtube.com/watch?v=cmZRQJdifLk

Men need to start treating women like people, not an afterthought or a slur. 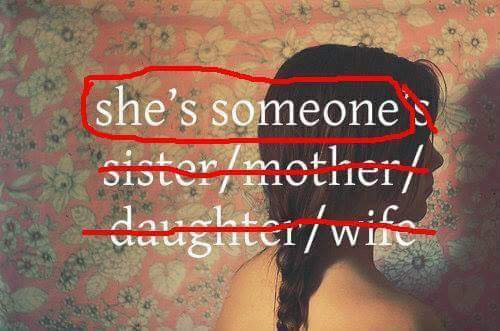 And speaking of this, I think all the Republicans (and whoever says the above needs to relearn how to use their words.I have heard them say all of the above. EVERYTHING but...she is a PERSON.

We are PEOPLE damn it, not an afterthought, and not something to be used as a dick magnet. Yes, I said that. How would you feel being objectified your whole life??? Walking down the street and men nodding at you in approval,(as if I care..I do not dress for you) looking you up and down, or yelling obscenities, what they want to do to you, or even grabbing at you (which really has happened to me)

One guy at the YMCA actually keyed my car, all the way from the back to the front around the bumper because I confronted him as he wouldn't stop staring at the ladies in the pool (they kept complaining but did nothing about it, so I DID do something about it, I told him it was making the ladies uncomfortable. He did stop, but then, I am pretty sure he keyed my car. He is the only one there I don't talk to and am not amicable with, and he has seen me get in my car.) I am sick of being treated like if I don't talk to a man or respond that I am somehow offensive, or have insulted their "manhood" and must be taught a lesson.

Enough already!!!! Its controlling and SICK.

That video of Trumps disgusting behavior and BIlly Banks misogynistic “good ol boy” response (egging him on in a “get it on” kind of way- and telling a woman that she should hug Trump after that display ) should be the ultimate example of the way men should NEVER respond to women.

We are after all, not a slab of meat for your inspection (speaking of Trump steaks)

My favorite Ted Talk says it better than I ever could.

If every man was like Jackson Katz, we wouldn’t  have this problem.

Who knows what Trump has gotten away with. But if this is any indication, I wonder how many women he's hurt (As more and more women are coming forward.)

From the Huffington Post Article "The second declaration is even more astonishing, because it is signed by “Tiffany Doe”, Mr. Epstein’s “party planner” from 1991-2000. Tiffany Doe says that her duties were “to get attractive adolescent women to attend these parties.” (Adolescents are, legally, children.

Tiffany Doe says that she recruited Jane Doe at the Port Authority in New York, persuaded her to attend Mr. Epstein’s parties, and actually witnessed the sexual assaults on Jane Doe:
I personally witnessed the Plaintiff being forced to perform various sexual acts with Donald J. Trump and Mr. Epstein. Both Mr. Trump and Mr. Epstein were advised that she was 13 years old.
It is exceedingly rare for a sexual assault victim to have a witness. But Tiffany Doe says:
I personally witnessed four sexual encounters that the Plaintiff was forced to have with Mr. Trump during this period, including the fourth of these encounters where Mr. Trump forcibly raped her despite her pleas to stop.
Tiffany Doe corroborates, based on her own personal observations, just about everything in Jane Doe’s complaint: that twelve year old Maria was involved in a sex act with Mr. Trump, that Mr. Trump threatened the life of Jane Doe if she ever revealed what happened, and that she would “disappear” like Maria if she did.

This brings me back to that giant orange pusticle of a man.

Just because he’s “rich” (so he sais) doesn’t give him a free pass.

We can do SO much better.